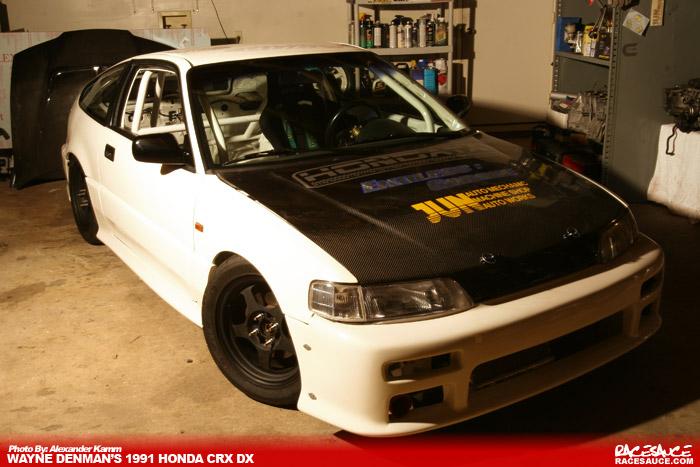 Feeling nostalgic this weekend so I thought I would “dig in the crates” for an old online feature I had with Racesause.com. Back in the “Hawaii import golden era” Racesause was one of the top tier online websites. They were throwing parties, car meets, doing car shows and featuring cars from all around Hawaii. Lots of cars, woman and alcohol.  Reflecting back to that time and those sites I almost find it impossible to have found a better time to be in love with building imports. Enough of the teary eyed stuff. Here are the words and photos from the feature found on the Racesause.com.

November 8, 2004 marked a day for Wayne that will never be forgotten. In a secluded area of Oahu, he crashed the familiar coffee colored CR-X that most of us might have seen. This was almost immediately after his final product was completed. He was testing out his freshly built and tuned 220whp B20VTEC when an obstruction caused him to lose control and the car met a telephone pole. That was the end of his love for his mocha monster. A little bit of humility goes a long way, and now he was starting from the ground up for the second time. 6 months later, you have his second coming. The J-Spec Championship White CR-X u see was a mastermind effort.

He knew right away that he had to salvage any and everything possible from his old shell to speed up the rebuild. So everything that he could pull from the wrecked ’88 HF was put to the side while he watched his dreams and hard work get towed away to the junkyard.

Enter his 1991 CR-X DX which was about to get a makeover the likes that no CR-X has ever seen. Brandon Fujimoto offered his assistance with the grafting of the NHRA-spec roll cage to the bare frame and Wayne left the actual blueprinting of it all up to him. The 2 of them worked through the weekend to finish the cage in less than 16 hours. Wayne then stripped down the interior to prep for paint. Keith Kato finalized Wayne’s bodywork and sprayed the 2000 Japan Championship White over the engine bay, cage, interior, and outside. The rest of the fabrication was left to Wayne. Engine installation, seats, dash, the entire fuel system assembly and lines installation was handled by him. Brandon stepped in again to fabricate a trick Tig-welded Aluminum 4 gallon fuel cell. All OEM glass installation and refurbishing his Carbon SiR Hood from the previous CR-X was just a matter of some resin and sanding.

No more than 6 months later, with everything buttoned up, a new set of rims purchased and a quick Hondata re-tune by the local dealers, and Wayne was all set for his daily treks from his home in Ewa to the grind in Hawaii Kai. That’s right, everyday, and his only radio is the hum of a 220whp 92 octane big bore B20VTEC motor to go along with the island sights. I could think of worse things to have to listen to.

On to some photos: 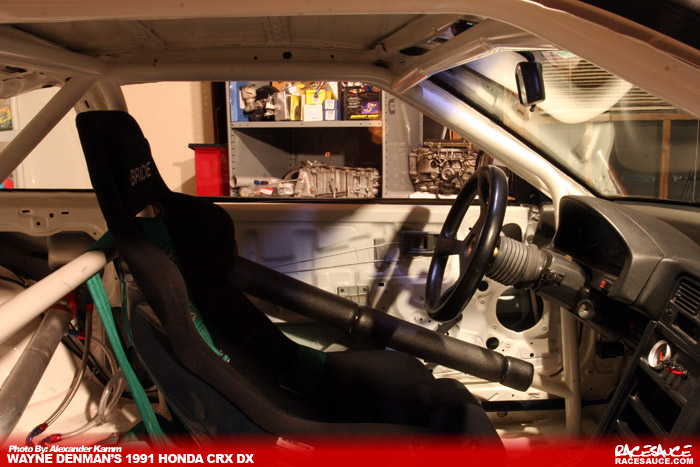 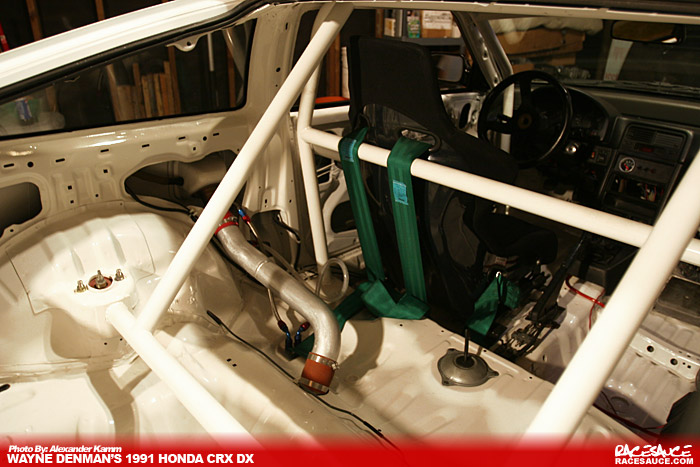